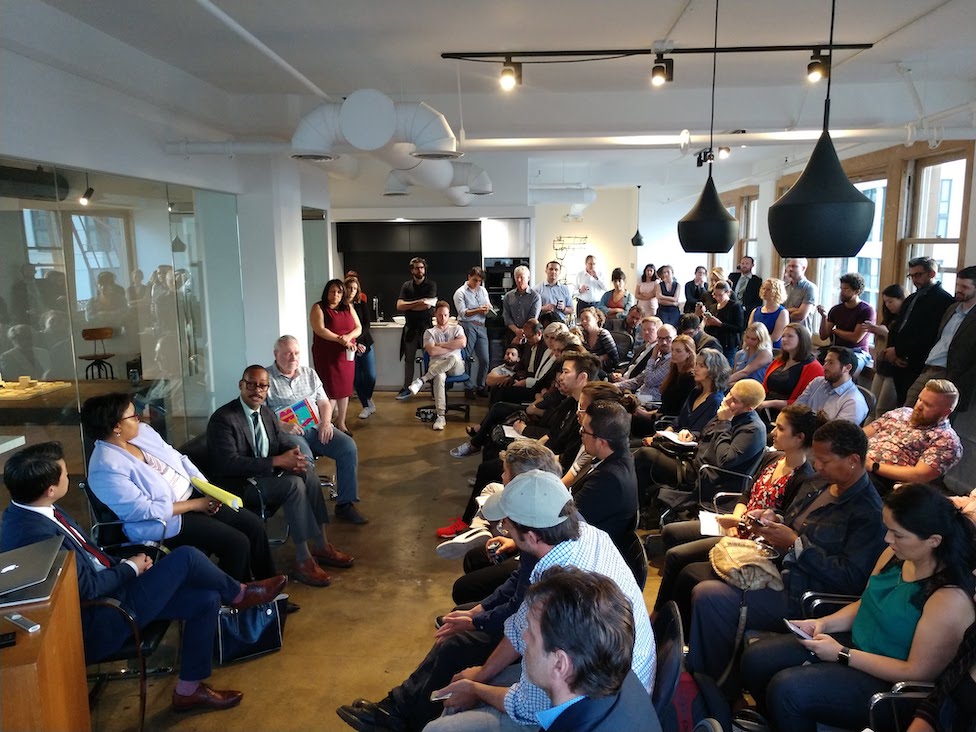 Business and Cultural inclusion: as we prepare for the 2026 World Cup and 2028 Olympics & Paralympics

On March 19th, please join us for panel discussion about how to achieve greater business and cultural inclusion as our region transforms itself over the next ten years.

In response to a feasibility study “Compete4LA” created by the Los Angeles Business Council Institute, AIA Los Angeles has an opportunity to help shape an initiative that aims to create an open platform for local, small businesses to connect to major contract opportunities, especially related to our preparation for the Olympics and other major events.

AIA|LA in support of its members would like to partner with the City of Los Angeles, LABC, and other organizations to develop a comprehensive implementation strategy that more deeply engages the regional design community at large to participate in the design and economic benefits of the major events coming to Los Angeles including the 2026 World Cup, and 2028 Olympics & Paralympics.

This panel discussion will serve as an opportunity to discuss answers to the following questions:

1. To optimize small business inclusion we suggest that a measurable baseline of at least 30% of all prime contracts go to small business. Is this reasonable and if so, can you describe a path forward to get this done?

2. There will be a limited number of facilities built to host many of the upcoming major events but there are a number of infrastructure projects already underway including projects at the airport and metros expansion that will leave a lasting legacy in Los Angeles. Are there other projects that may include the built environment, such as a network of parks or better streets or social programs that you feel are worthy of investment and could provide a legacy beyond the next twenty years?

3. There are many definitions of small and medium sized business that often times do not represent the Los Angeles area. How do we revise the legislation to recognize the diversity of firms, staff and ownership that exists?

4. How do we utilize technological innovations to improve the procurement and project delivery process with a special emphasis to increase opportunity for smaller firms to serve as prime contractors?

Ms. Leslie has served as LABC President since 2001, growing the council into one of the most prominent business organizations in the region, working closely with leaders from business, government and the non-profit sectors to enact policies and programs to strengthen Los Angeles’ economic competitiveness and quality of life. Under her leadership, she launched the LABC Institute in 2010 as the 501 (c) 3 research and education arm, attracting local and national funding. Both organizations operate with the core mission, focused on creating cutting edge policy strategies to reduce the region’s housing affordability gap, increase sustainable development, promote international trade, and expand high-paying workforce opportunities.

Ms. Leslie currently serves on the LA Cleantech Incubator Board of Directors, Los Angeles Conservation Corporation Board of Directors, UCLA Advisory Committee for the Luskin Center for Innovation, and is a member of the Pacific Council of International Policy. She previously served as a Commissioner on the Los Angeles Department of Water and Power Board, Advisory Committees of L.A. Family Housing and the California Women’s Law Center.

In her previous role as Deputy Mayor for the City of Los Angeles under Mayor Richard Riordan, Ms. Leslie was responsible for the Mayor’s Business Development programs. Prior to joining the Riordan Administration, she was Deputy Director of the U.S. Small Business Administration (SBA), where she oversaw the Northridge Earthquake relief dollars for Los Angeles as part of her portfolio of lending and education programs for SBA Director Erskine Bowles. She also served as the Executive Director of the California Economic Development Commission, overseeing policy development and trade missions for California business. Ms. Leslie was also President Clinton’s California Finance Director in his successful 1992 race for President.
Ms. Leslie received her Bachelor’s degree from the University of Santa Clara, holds a Master’s degree in Public Administration from the University of Southern California, and attended the Executive Management Program at the UCLA Anderson School of Management.

Mark Morales is a Vice President of SBA Lending at City National Bank. Mark has over 20 years of business banking experience and specializes in SBA financing and loan programs for diverse owned businesses. Mark is the SBA Los Angeles District Office 2016 Financial Services Champion of the Year and the State of California, Department of Insurance 2018 Insurance Diversity Trailblazer.

Mark currently serves the community as:

His experience as a business owner, a community leader, a minority advocate, an industry representative and a commercial lender give him a unique perspective in all of his endeavors.

“I created the position of Chief Procurement Officer to maximize the value of City resources, and make sure there’s a level playing field for small and minority-owned businesses that want to share in the opportunities that our city creates,” said Mayor Garcetti. “Michael’s experience streamlining contracting processes in New York City — and his demonstrated ability to protect taxpayer funds as we create a more inclusive economy — make him the right person for the job.”

Owh will build on the work of the Mayor’s Operations Innovation Team (O-Team) — an initiative Mayor Garcetti launched in 2015 through the support of the Mayor’s Fund for Los Angeles, and in partnership with the Los Angeles Coalition for the Economy and Jobs, as well as a number of private funders. The O-Team’s focus is to improve the City’s core business systems, deliver operational efficiency, and maximize the value of taxpayer dollars.

“It is an honor to serve as the Chief Procurement Officer for the City of Los Angeles,” said Owh. “Our procurement process is vital to the operation of the City, and I look forward to making procurement more strategic and inclusive in order to deliver the best value and services to our residents.”

Prior to joining the Mayor’s Office, Owh was appointed by New York City Mayor Bill de Blasio to serve as Director of the Mayor’s Office of Contract Services and the City’s Chief Procurement Officer. In these roles, Owh was responsible for acquisition policy and the oversight of more than $21 billion coordinated through 40 city agencies. Previously, Owh was General Counsel at the NYC Department of Youth and Community Development and Deputy General Counsel at the Department of Small Business Services.

Douglas Hanson has nearly two decades of experience working with some of the world’s leading architects and architectural firms. He has gained a broad depth and range of experience designing major projects in Asia, Europe, and North America. Mr. Hanson is equally accomplished in all aspects of project development, from predesign and design work to construction and project management. His experience includes cultural, multidisciplinary collaborations, large-scale residential and mixed-use projects, as well as more modestly scaled commercial and retail projects.