When we asked Wayne Ratkovich, President & CEO, The Ratkovich Company, to select one of his projects that had most contributed to Los Angeles, the developer demurred. How to favor one?

The list he responded with demonstrates the breadth of his contributions to the city’s landscape. The Hercules—Howard Hughes’ old playground to the west; The Oviatt, a downtown catalyst; The Wiltern, mid-city gem that turned LA NY; and more. (See below for them all.) Ratkovich’s list was a map of Los Angeles life, of a past honored and yet entirely forward leaning.

If you have not occupied one of these iconic structures, enjoyed their space from within, you have driven by them, looked to the left, or right, seen them, and that moment has elevated your design day.

But it was the meticulousness of Ratkovich’s answers that illuminate the man. They demonstrate the care and preciseness with which he has returned to life some of Los Angeles most impactful (and beautiful) spaces and continues to. (To learn about new work, see below.)

Here then, an inside look of those buildings from Wayne Ratkovich, the 2020 AIALA Merry Norris Design Advocate, Developer award recipient:

The Hercules was an opportunity to adaptively reuse eleven unwanted former Hughes Aircraft Company buildings. After doing a historic survey and assessment of the structures we brought in marketing teams in to tour the project and learn about our vision of what was possible.

Ultimately, we landed the YouTube studios as our first tenant. Their studios not only disrupted the entertainment industry, but along with the balance of our project triggered Silicon Beach LA’s Tech Center. Google recently opened their new Spruce Goose headquarters in the main Hercules structure completing the campus that we manage today.

Although we did not build the residential at Playa Vista, I am told that Brookfield gives the Ratkovich Company and the Hercules project credit for creating demand for the largest new West Los Angeles residential project in over 50 years.

The Oviatt was my first historic restoration and a reimaging of a landmark art deco building purchased for the price of the land value. Once we bought it, and ultimately put the Rex Il Ristorante in the ground floor, a former men’s haberdashery, it became the city’s finest restaurant long before Downtown was on anyone’s radar.

The LA Conservancy was founded at The Oviatt and ultimately was responsible for promoting and enabling many of our city’s finest buildings to be saved.

The Wiltern opening night was a moment of truth when an attendee turned to me as we were leaving and said it was the first time, they felt New York energy in Los Angeles. Once we renovated the Pellissier Building it attracted many of the city’s top creative firms including the AIA. Saving the Wiltern Center improved the community around it as well.

The BLOC was a reinvention of the former Macy’s Plaza, a full city block with 1.9 million square feet in the heart of the city. Although it was a challenging development to complete without closing the project for construction, everything we have done to date has been very rewarding. The Sheraton Grand is a huge success, Macy’s is the fastest growing store in their chain, our tenants love using the roof top lounge and it is wonderful to watch Joey DTLA, even under current restrictions, teaming with guests enjoying the action on 7th street.

5900 Wilshire presented the opportunity to create a true landmark centerpiece to Museum Row. We were proud to work with the Wende Museum in putting the largest display of the Berlin Wall in the front garden. By enclosing the exterior entrance and creating a landmark lobby the building was elevated to new heights. We were flattered when LACMA moved into the building and will soon have rooftop signage. 5900 Wilshire has become the centerpiece of that cultural district.

2. What’s the best thing a client or community member can say to you?
When we come into a community, we hope to improve people’s lives. Whether it’s through providing a new restaurant that becomes a favorite spot or through award-winning creative offices to work in. It is especially rewarding when people tell us they have enjoyed a performance in one of our placemaking spaces. 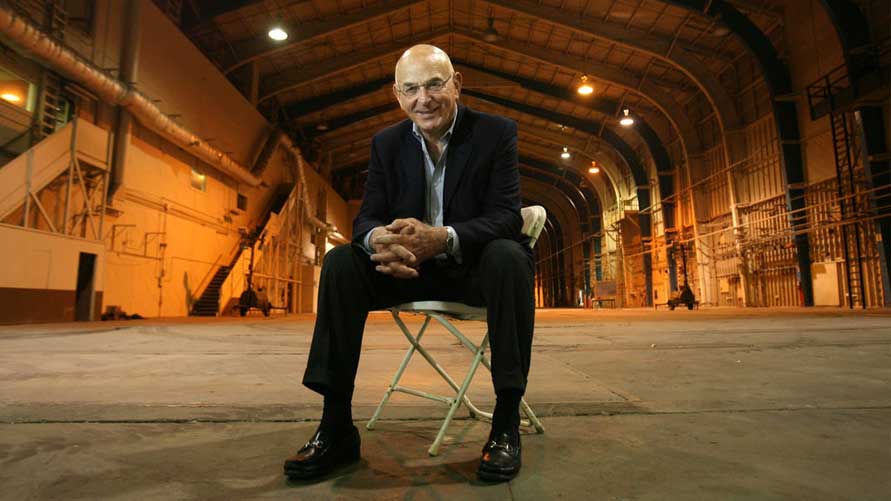 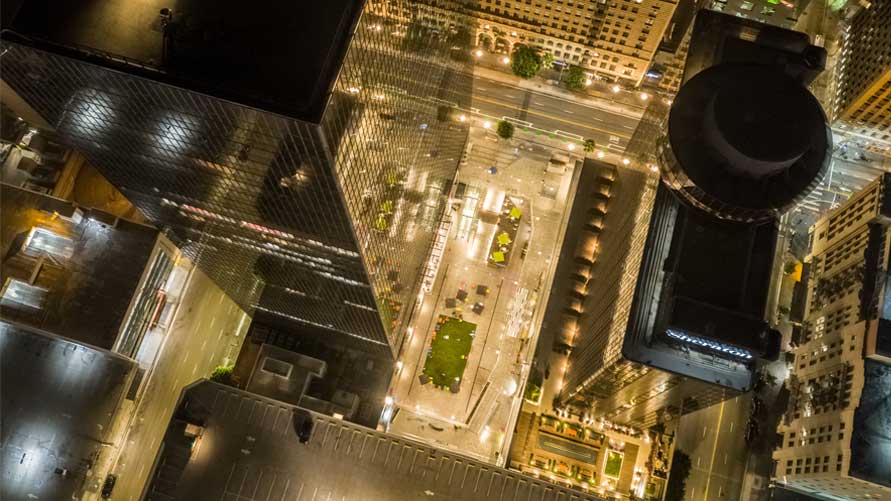 I live in the Larchmont area and enjoy visiting the village’s shopping and eating spots.

The BLOC in DTLA is always a favorite spot for me. It has become the living room or gathering spot for many city dwellers and visitors alike. Its garden plaza is a great people-watching space and provides plenty of outdoor space in our current environment.

[The AIALA humbled to honor Wayne Ratkovich, as a Presidential Honoree, at the 2020 AIALA Design Awards, October 29, 2020. To purchase tickets, click here.]

4. What’s the best depiction of LA architecture in a movie, Netflix project, video or book and why (if you’re so inclined.)

Our Hercules Campus in Playa Vista was the former offices and manufacturing facilities of the Hughes Aircraft Company. When we first purchased the property and its 11 abandoned buildings you could almost feel Howard Hughes’ spirit on the campus. Seeing how Mr. Hughes’ world was depicted in The Aviator was a classic look at early LA Architecture that I appreciated.

5. What’s on your bucket list design-wise. What’s that dream project?
Our San Pedro Public Market project has been a long time coming and given its outdoor waterfront setting is well suited for what we anticipate in the post CV 19 environment.

Our world renown design team of James Corner Field Operations, Studio One Eleven and Rapt Studios has designed unique public spaces on the 42-acre site with direct waterfront connections with a backdrop of the authentic industrial theater of the Port of Los Angeles.

Completing this project is important to me, BUT my dream project is to do a project with Frank Gehry. We are longtime friends and have something in the works, but it is more of a public private partnership. Time will tell. In any case I am actively seeking new opportunities every day.

Images:
Banner + Image 3: The Bloc, courtesy of The Ratkovich Company