“How could Merry Norris grow old? She couldn’t spell the word. In the twenty years I knew her, she grew younger every day. This is how the most beautiful flowers live. And then, in earth’s cycle they recover their place in the earth. Merry, a flood of gratitude for your grand and luminous life.” These were the words Clive Wilkinson, FAIA, sent us, sharing his appreciation of the art and architecture world’s Merry Norris, who passed away on March 16 at the age of eighty, surrounded by her family.

Merry Norris, Hon. AIA|LA, brought star power to every AIA|LA event she attended—and there wasn’t a big bash or a cultural happening that Merry wasn’t at. She had style. She was whip smart. She was the most vibrant conversationalist in a group.

The last time those of us in the AIA|LA office saw her was at a dazzling cocktail party thrown by a renowned and gregarious architect and his vivacious wife, just a few weeks back. Everyone was there so, of course, Merry was too—living it up, even though the challenges to her health which had afflicted her in the last couple of years, were gnawing at her. Never mind that she was struggling, Merry came to the party, and flashed her high wattage smile—her presence, of course, made the night complete.

“Merry knew and was admired by everyone!” says Larry Scarpa, FAIA. “It’s hard not to be admired and be friends with artists and architects when you are as likable as Merry—smart, funny, and engaging, and so pivotal to the arts.”

“I think the thing that most excited Merry was seeing anything, a building, a painting, a sculpture through her unique lens of life. What made her so insightful and fun to be around is that she really enjoyed meeting people who were truly into what they were doing,” says Joey Shimoda, FAIA, a close friend who met her in 1986.

“Some of my most memorable experiences in Los Angeles are exploring and learning about the world with Merry,” Li Wen, AIA, another friend of Merry’s, told us. “Merry was the most generous, caring and curious person I’ve had the pleasure to meet and become friends with in Los Angeles.”

If Merry’s social circle included some of the city’s most celebrated design-world names, she shared her curiosity, joi de vivre, and graciousness regardless of one’s status.

“It would have been easy for Merry to become an inaccessible icon. She was that good at what she did. But it always seemed to me that she really liked being out there in the midst of everything and everybody,” said Karen Wolfe, who met Merry when Wolfe was an executive assistant for Frank Gehry, FAIA. “Meg Cranston and I put on a small art auction once for our kids’ school and I invited Merry. She had such a blast. She said in wonderment, ‘how did I get this invitation?’ Merry Norris!”

“I will miss her deeply—she was different in all the meaningful and worthy ways,” says Li Wen, who first encountered Merry in the 1990s when the office he was working for engaged her as an art consultant, before he launched his own office, and then became a Principal at a major firm. It was the entrée many would have into the world of Merry Norris. 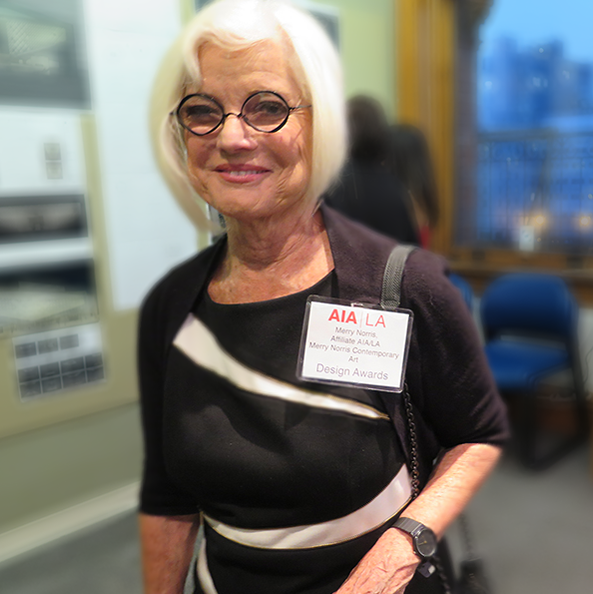 “Merry brought light to life, she brought art into the light. She populated parks, library ceilings and hotel corners with art, and even invited taciturn permanent guests into her living room so the party would not stop,” says Clive Wilkinson, FAIA.

To this role, Merry brought with her the expertise, relationships, and focus that drove her as a key figure in the founding of Los Angeles’ MOCA from 1979 into the early eighties.

The Los Angeles-based art critic Peter Frank charts her influence on our city, and her deep understanding of the connection between art and architecture: “From the 1960s until her death Merry Norris was one of a small group of non-artists — art lovers, art patrons, art activists — who regarded art and architecture as both ingredients in a civic culture and symptoms of one. Merry knew that Los Angeles was a diamond in the rough, just waiting to take itself seriously and — thereby — take the world by storm,” he wrote to us. “Equally visionary and hands-on, she was instrumental in the creation of the Museum of Contemporary Art, not least in its physical manifestation as a masterpiece (or two) of architecture but also in its programmatic manifestation as the nucleus of a contemporary discourse that brought the local and the international together. Responsible for so much that is great about art in LA, Merry will be long remembered and sorely missed.”

Her capacity to identify what was not yet visible was a key to her practice, continues Joey Shimoda, FAIA. “She was always looking for talent and ‘diamonds in the rough’,” he says. “What I most admired her for was that she was incredibly loyal to those she believed in and championed them with great tenacity and enthusiasm.”

“Because she paid attention and wanted to share her point of view, many people become recognized and her belief in them made for success and recognition. Her intuition was pretty much 100 percent. When she thought someone would make a difference, they all made a huge impact on their creative discipline,” he continued.

Merry’s energy and contributions including serving on a number of boards that supported the profession.

Merry was the first Public Director on the AIA|LA Board of Directors in 1995, a role she held for 14 years; served on the Board of Trustees of the Southern California Institute of Architecture (SCI-Arc); and was on the Board of Advisors for the Los Angeles Forum for Architecture and Design.

In 2011, the AIA|LA recognized her as a Presidential Honoree for being “a sublime design champion and public arts maverick” with the Chapter’s first “Design Advocate Award.” She had been named an Honorary Member of the AIA|LA in 1990.

Merry, who passed away due to health issues exacerbated by pneumonia, is survived by her three children Jill Bauman, James Wiester, and Joni Martino. The AIA|LA joins so many in the architectural community extending their condolences and gratitude for their mother’s contributions.

A memorial will be organized once groups can again gather. In the meantime, her family invites you to send thoughts and photos to rememberingmerry@gmail.com