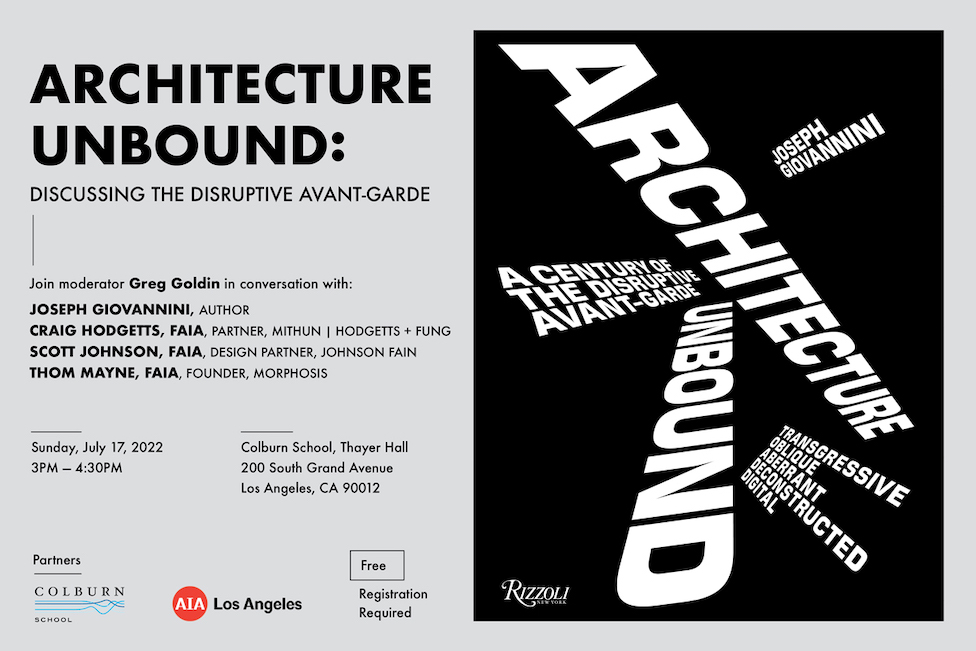 Advance reservations are now over out for this event. Walk-up guests may be able to attend, depending on capacity.

This is a FREE in-person event. Attendees will be required to show proof of vaccination (including booster dose) along with proof of identification. Please read and check the agreement and safety boxes in the registration. Additional information regarding general event information and check-in process will be emailed directed to registrants 24 hours before the event.

Three prominent architects will join the author of the new authoritative history of the Avant-Garde architecture of our times. Architecture Unbound: A Century of the Disruptive Avant-Garde (Rizzoli), by noted critic and designer Joseph Giovannini, has been called “an amazing achievement,” “a masterpiece,” and “an instant classic.” The book chronicles the century-long influence of avant-garde art and the theories of the oblique on prominent architects and some of their highest-profile projects—many of which are in Los Angeles. Don’t miss this lively discussion of architecture that is transgressive, oblique, aberrant, deconstructed, and digital with Thom Mayne, FAIA, Scott Johnson, FAIA, and Craig Hodgetts, FAIA. 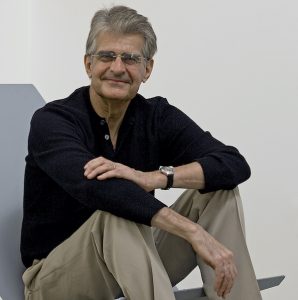 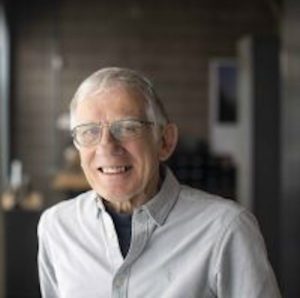 Craig Hodgetts, FAIA, Partner, Hodgetts + Fung
Craig Hodgetts, FAIA, partner at Mithun | Hodgetts + Fung, is known for employing an imaginative weave of high technology and storytelling into his designs for The Hollywood Bowl, Hyde Park Library, and numerous exhibitions. He is a professor at UCLA Graduate School of Architecture and Urban Planning and a keen social critic, whose book of collected articles is Swimming to Suburbia and Other Essays. 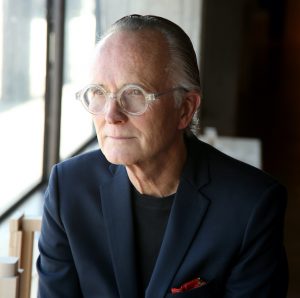 Scott Johnson, FAIA, Design Partner, Johnson Fain
Scott Johnson, FAIA, design partner of Johnson Fain, counts among his many designs high-rises in Century City, wineries, mixed-use complexes, and—in collaboration with his partner William Fain, FAIA—First Americans Museum in Oklahoma City. He was Director of the Master of Architecture Program at USC, and co-recipient with Fain of AIA|LA Gold Medal. Among his several books are Essays on the Tall Building and the City and The Big Idea: Criticality and Practice in Contemporary Architecture. 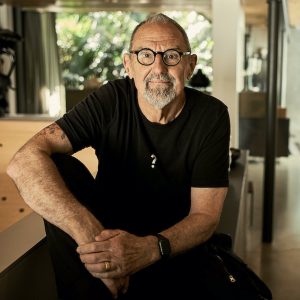 Thom Mayne, FAIA, Founder, Morphosis
Thom Mayne, FAIA, founded Morphosis in 1972 as a collective practice of architecture, urbanism, and design, rooted in rigorous research and innovation. He has designed major projects throughout the world and has been the subject of more than 20 books. Recipient of the Pritzker Prize and AIA Gold Medal, Mayne has taught at numerous schools, including SCI-Arc, Yale, Harvard, UCLA, and Berlage Institute, among many others. 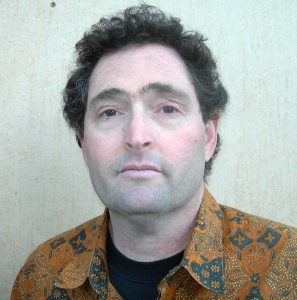 Greg Goldin, Writer and Curator
Greg Goldin is the co-author and co-curator of the Never Built series of books and exhibitions that explore unrealized plans in Los Angeles, New York City, and Paris, France. He is working on The Phaidon Atlas of Never Built Architecture, and was previously the architecture critic for Los Angeles Magazine.