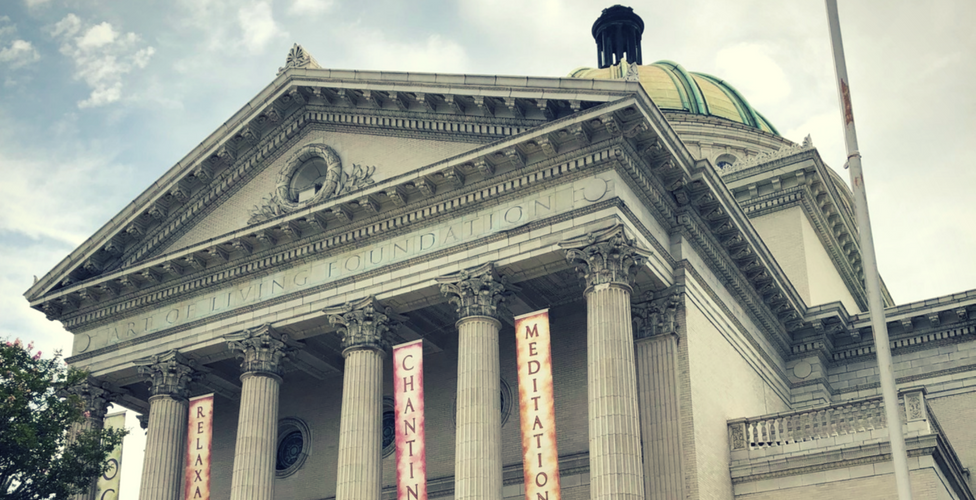 Owned and Restored By: Art of Living Foundation with Guru Construction Company

The church sanctuary dominates its setting and is visible from great distances, with a colossal Corinthian portico and copper-clad dome dominating the design. “Closely resembling portions of the Mother Church in Boston, the building exemplifies the continuity and quality of craftsmanship present during the primary period of development of Christian Science,” according to its National Register of Historic Places Inventory-Nomination Form (placed on the National Register in 1987).  When it was built, Second Church was hailed as the largest and most elaborate of the Christian Science denomination’s branches west of the Mississippi.

Today the property is owned by the Art of Living Foundation, and has undergone a beautiful restoration.

ABOUT THE ART OF LIVING FOUNDATION:

The Art of Living Foundation is a non-profit educational and humanitarian organization that offers innovative breathing, meditation, and trauma-relief programs for individuals and communities in more than 150 countries. It was founded in 1981 by spiritual leader and humanitarian, His Holiness Sri Sri Ravi Shankar. The Foundation holds special consultative status with the United Nations, and is one of the largest volunteer-based NGOs in the world.

At this location, they have regular meditation, yoga, singing, and Art of Living programs. And throughout L.A., the Foundation has supported its partner organization, the International Association for Human Values, with its YES! for Schools program that has brought stress relief and leadership to more than 12,000 high school kids, including many in this area.

Other programs have been brought to USC and other university students, to veterans, government, and business, to inmates and gang members, to religious groups of all major traditions, and to people with AIDS, trauma, and depression.

The published research on the Art of Living Foundation’s breathing techniques shows a significant reduction in stress, heightened clarity and awareness, relief from depression, improved immune function, and other mental, emotional, and physical benefits.

Foundation volunteers and teachers also participate in major disaster and trauma-relief efforts around the world.