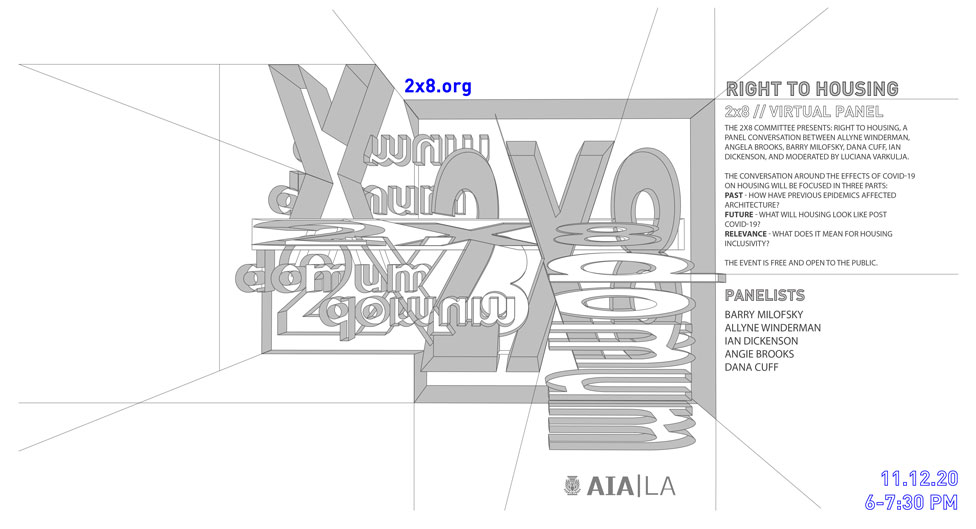 This is a Free Virtual event. Please register below via the Zoom registration link to receive the Zoom Link

The conversation around the effects of COVID-19 on housing will be focused in three parts:

PAST – How have previous epidemics affected architecture?

RELEVANCE – What does it mean for housing inclusivity?

Barry Milofsky, a graduate of the University of Cincinnati, is a founding partner of  M2A Milofsky and Michali Architects LLP. Projects produced by the firm have received local state and national broadcast and publication recognition for their excellence in design.  He been appointed to the Mayors(Los Angeles) to serve on the Cultural Heritage Commission, the Mayors Design Advisory Panel, and the Council District 13 Design Advisory Committee.

Allyne Winderman is an architect, urban designer, community advocate and educator. She is a Fellow of the American Institute of Architects, inducted in 2013 for her work on affordable housing, urban design and historic preservation.

Living in Los Angeles since 2010, Ian has been an active member of the academic, arts, and design communities, having participated in numerous exhibitions and events. He has taught design studio at USC’s School of Architecture since 2011, has been a consulting studio instructor at Washington University in St. Louis, and has served as invited design critic for a number of additional academic and research institutions. Additionally, he has contributed to a range of international publications, panels, research journals, and think tanks such as the Getty Research Institute, the Arid Lands Institute, and the Milken Institute.

Angela is a recognized leader in the field of environmental and sustainable design and construction. She has pioneered more holistic ways of delivering affordable housing, sustainable architecture and advances in social equity. She has been practicing architecture since 1991 and is responsible for firm development in the area of housing and policy, leading the firm’s sustainable initiatives and overall management.

Dana Cuff is a professor, author, and practitioner in architecture. Her work focuses on affordable housing, modernism, suburban studies, the politics of place, and the spatial implications of new computer technologies. Cuff’s research on postwar urbanism was published in a book titled The Provisional City (MIT 2000), she edited Fast Forward Urbanism with Roger Sherman (Princeton Architectural Press 2011), and she recently coauthored Urban Humanities: New Practices for Reimagining the City with her colleagues from the Urban Humanities Initiative (MIT 2020). She founded cityLAB in 2006, and has since concentrated her efforts around issues of spatial justice in the emerging metropolis. Dr. Cuff is widely published, the recipient of numerous fellowships, and lectures internationally. Three recent awards describe the arc of her career: Women in Architecture Activist of the Year (2019, Architectural Record), Researcher of the Year (2019, Architectural Research Centers Consortium), and Educator of the Year (2020, AIALA).

Luciana Varkulja is a registered Architect and Urban Designer in Brazil, with 15 years of experience, who has been working on projects in the US and internationally (Latin America, Africa and Asia) under her practice uma architecture & design, founded in 2002, and as a collaborator. Since her graduation from University of São Paulo, in Brazil, she had the opportunity to work on a wide variety of project types and scales, from furniture design to large institutional and civic buildings, urban design projects and master plans. With a technical background that dates back to her collaboration at an engineering firm in São Paulo, she has kept a straight connection with the art world through set design, exhibitions, installations and films.

Ms. Varkulja has worked on projects from schematic design through completion, always wearing multiple hats during that process, from designer role to project management support, coordinating the process internally to the office as well as with clients and consultants. She worked as a Senior Designer at AECOM and SOM and as a Project Designer at Allied Works Architecture. She has taught and is currently a visiting juror at Columbia University, Otis College of Art and Design and Cal Poly Pomona.