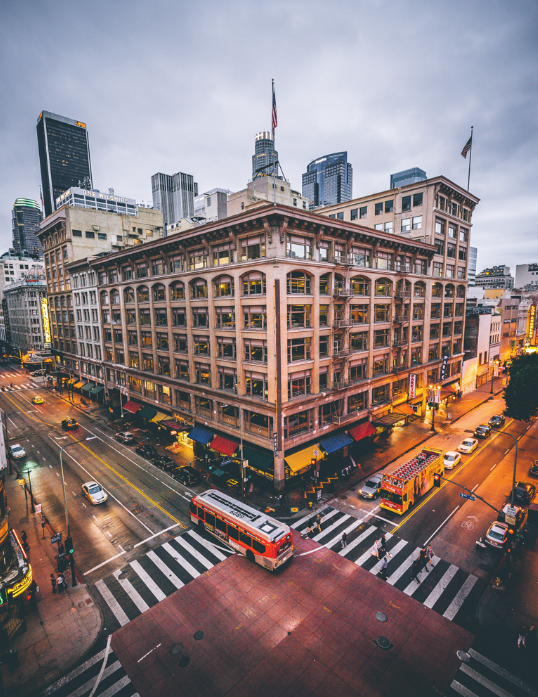 DTLA 2040, an Overview of the Proposed Community Plan for Downtown Los Angeles

Los Angeles City Planning is partnering with the Downtown community to update the Central City and Central City North Community Plans. The Downtown Community Plan will describe a collective vision for Downtown’s future and include policies, plans, and implementation programs that frame the City’s long-term priorities. Downtown will have the first Community Plan in the City to apply new zoning tools developed as part of the comprehensive update to the City of Los Angeles’s Zoning Code.

The update of the Downtown Community Plan takes cues from the City’s General Plan, particularly from its Framework Element, which describes the City’s long-term growth strategy. The Framework Element lays out goals, objectives, and policies for the range of land uses throughout the City, including Downtown, and guides the development of Community Plans. The Framework Element describes Downtown as “the principal government and business center of the region, with a worldwide market,” “the highest-density center of the City,” and a “hub of regional transportation.”

The Plan will build on Downtown’s concentration of transit options. With support from Metro’s Transit-Oriented Development Grant Program, the City is promoting Downtown’s role as the convergence point of regional transit lines that connect multiple cities across Los Angeles County.

Brittany Arceneaux is a New Orleans native working as a Planner at the City of Los Angeles Planning Department. Her primary responsibility is long-range planning for the Downtown Community Plan Area. In this role, she provides critical analysis of and recommended strategies on local land use regulations as well as information and technical assistance on a wide range of land use planning, design, and development issues. She has presented her research at conferences such as the New Orleans Housing Community Development Conference and the National Reclaiming Vacant Properties Conference. Brittany holds a Bachelor of Science in Urban Studies and Planning (BS) from the University of New Orleans.

Clare Kelley is a City Planning Associate in the City of Los Angeles Department of City Planning, working on the comprehensive update to the Downtown Los Angeles Community Plan. In addition to her current role, Clare has worked in open space and active transportation planning in Los Angeles. She is a Vice Director of Awards for the Los Angeles Section of the California Chapter of APA. Clare is a native Angeleno with a Masters of Planning from the University of Southern California and a BA in History and Environmental Science from Barnard College.

Veena Snehansh is a City Planning Associate with the Los Angeles Department of City Planning, currently engaged in updating the Downtown Community Plan. Veena has previously worked in the field of environmental analysis and transportation planning. Veena grew up in India and moved to Los Angeles in her later years. She holds a Master of Urban and Regional Planning from the University of California at Los Angeles.

Tal Harari is a City Planning Associate in the City of Los Angeles Department of City Planning, where she works on long range policy planning. She is currently working on the comprehensive update to the Downtown Los Angeles Community Plan, part of the City’s General Plan. Harari is currently a fellow in the Rautenberg New Leaders Project, guiding Angelenos with a commitment to social and civic responsibility to engage with local elected and community leaders to address some of the challenges facing the City. She is a Los Angeles native and holds a BA in History of Arts & Visual Culture from the University of California, Santa Cruz, and a Masters of Planning from the University of Southern California.

Craig Weber is a 14-year veteran in the Department of City Planning, with a degree in City and Regional Planning from Cal Poly San Luis Obispo. Craig is a Principal City Planner, currently overseeing the City’s efforts to update Community Plans in Hollywood, Boyle Heights, and Downtown. In addition, Craig leads efforts of the City to assume the land use authority of the former Community Redevelopment Agency, as well as establish Transit Neighborhood Plans around Expo Line and Purple Line transit stations in the Westside and in Mid-Wilshire. Previously, Craig has overseen the adoption of Community Plans for Sylmar, Granada Hills, West Adams, South Los Angeles, and Southeast Los Angeles, the latter three of which were awarded by the American Planning Association. Early on in his career with the City, Craig led efforts to adopt Preservation Plans for 18 of the City’s Historic Preservation Overlay Zones and established the Department’s first HPOZ unit. Craig is himself a historic preservation and Los Angeles history enthusiast and is nearly finished restoring a 115-year-old bungalow in Jefferson Park that he shares with his husband, three foster children, and two dogs.