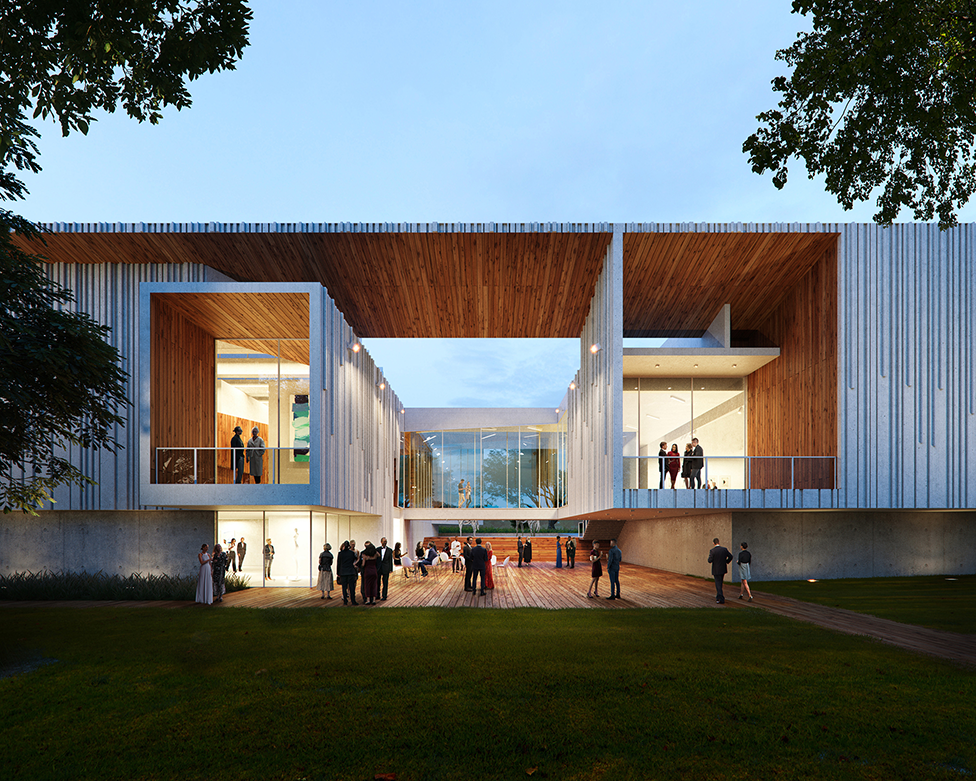 Learning Units: 1 LU/HSW | Scroll to end of page to RSVP

This is a virtual event.  Virtual meeting information will be email directly to registrants.

Cultural spaces and landscapes have various meanings across differing regions as does the technologies and systems employed. Brooks + Scarpa has completed and is currently working on various cultural arts buildings across the United States. In 2015 Brooks + Scarpa established a Fort Lauderdale, Florida office and is expanding their reach with a bi-coastal presence. This course will review two three completed projects, as well as review two cultural building projects currently on the boards in Florida. Case studies of five “cultural spaces” covering the America Tropical Museum, Southern Utah Museum of Art, Contemporary Art Museum, Art and Culture Center Hollywood and the Mennello Museum of American Art. These projects have been awarded national, state, and local design awards, the most recent being a P/A Award for the Mennello Museum of American Art in Orlando, Florida.

America Tropical Interpretive Center (Los Angeles):
This is a cultural museum and permanent shelter structure, observation platform and interpretive center, encompassing the allegorical mural “Tropical America” by David Alfaro Siqueiros, a radical expelled from Mexico in the 1930s. Offensive to the conservative society doyennes of the time, the mural, depicting the struggle of native peoples against imperialism, was painted over. As the whitewash peeled away, the mural was rediscovered in the 1960s as the Chicano movement gained momentum, but a lack of funds prevented its full restoration, which is now finally underway. The mural is located in the historic heart of Los Angeles, Olvera Street, along a second-story exterior wall.

Contemporary Art Museum CAM (Raleigh):
Located in Raleigh’s revitalizing Historic Depot District, the historic 1910 two-story brick structure built for Allen Forge & Welding Company and enlarged around 1927 for the Brogden Produce Company — and more recently home to longtime occupant Cal-Tone Paints — has emerged from its asbestos clad sheathing into a new incarnation as the home of Raleigh’s Contemporary Art Museum (CAM). The Depot District contains Raleigh’s only significant collection of buildings related to the heyday of railroad transportation and shipping in the Capital City. By recycling this important building, CAM preserves an important part of Raleigh’s history and demonstrates its commitment to sustainability and leadership in historic preservation.

Art and Culture Center (Hollywood, FL):
An expansion to an existing community art and culture center, the new arts education building is located in downtown Hollywood. The 5,400-square-foot education space is being designed to house classrooms for dance, music, visual arts and new media, and will include an outdoor courtyard. Our vision is that the new expansion is more than just a building, it should be a civic place for social interaction, bringing people closer to art and each other, providing opportunities for new, immersive art experiences. The arts education building “embraces” the west side of the historic structure, creating a modern link to the two-story, circa-1924 Spanish Mediterranean facade of the current center’s contemporary galleries and administrative offices.
With a dramatic sweeping roof form, the intent is to compliment the historic structure while looking forward to the future. The new dance/drama studio becomes a stage in the city where passersby can glean into the activities of the center. The western façade includes perforated metal shade louvers that act as a “radiator” to absorb and shed heat away from the building. The roof form is designed to be solar ready and a new courtyard becomes a shade and rain garden.

Mennello Museum of American Art (Orlando):
As a new major expansion of an American art museum in Orlando, the project enlarges the original museum of 10,000SF to nearly 40,000SF. With a need to expand the current museum in response to an expanded collection of art and community needs, the new museum provides for new educational components, event space, and major gallery space to feature and highlight the museum collection. The project seeks to build the public interest in art and cultural artifacts through innovative architectural design that creates Orlando’s “best porch.” The responsive design creates a valuable community building with the goal of exposing lay audiences to art outside and draw them inside. The art museum site is densely populated with historic trees, primarily Live Oaks and Southern Magnolias. The museum’s expansion is sited to spread into largely turf and asphalt covered areas, leaving the existing tree canopy completely undisturbed. Masked by the thicket of trees, the museum blends into its surrounding landscape from afar. A continual sculpture path leads the procession from street to building, with the museum slowly revealed as one weaves through the mix of native natural landscape and art in surrounding sculpture park. A central courtyard splits the museum’s expanded volume, linking the sculpture park down to the lake with one unifying axis from the Mayor Tree (a 300-year-old heritage Live Oak) to the lake edge below. Continuing the delicate, hanging patterns of Spanish Moss in the surrounding landscape, the museum itself is shrouded by its own unique pattern. Formed into the structure’s precast panels, this striated linear texture seemingly hangs off the building and shrouds the structure in continually shifting patterns of light and shadow. Following the ideology of the Floridian Vernacular as a stimulus, the design team focused on the juxtaposition of treated concrete against select infill of “Pecky” cypress wood, with highlights of expanses of curtain wall. 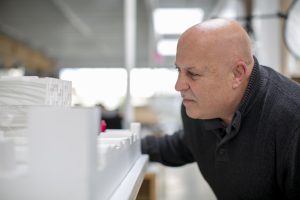 The work of Lawrence Scarpa has redefined the role of the architect to produce some of the most remarkable and exploratory work today. He does this, not by escaping the restrictions of practice, but by looking, questioning and reworking the very process of design and building. Each project appears as an opportunity to rethink the way things normally get done – with material, form, construction, even financing – and to subsequently redefine it to cull out to latent potentials – as Lawrence aptly describes: making the “ordinary extraordinary.” This produces entirely inventive work; work that is quite difficult to categorize. It is environmentally sustainable, but not ‘sustainable design;’ it employs new materials, digital practices and technologies, but is not ‘tech or digital;’ it is socially and community conscious, but not politically correct. Rather, it is deeply rooted in conditions of the everyday, and works with our perception and preconceptions to allow us to see things in new ways.
Mr. Scarpa has received more than 200 major design awards including twenty-one National AIA Awards, Progressive Architect Award, Architect Magazine’s HIVE 50 Innovator Award and R+D Research Award,, 2017 National AIA Collaborative Achievement Award, 2017 AIA Los Angeles Chapter Gold Medal, 2018, 2016 & 2014 Architect Magazine’s Top 50 Architecture Firms (ranked 2nd, 4th and 9th respectively), 2015 AIA California Council Lifetime Achievement Award, 2014 Smithsonian Cooper Hewitt National Design Award, 2005 Record Houses, 2003 Record Interiors, 2003 Rudy Bruner Prize, six AIA COTE “Top Ten Green Building” Awards and was a finalist for the World Habitat Award, one of ten firms selected worldwide. In 2004 The Architectural League of New York selected him as an “Emerging Voice” in architecture. His work has been exhibited internationally including the National Building Museum in Washington, DC. He has been Featured in NEWSWEEK and appeared on The Oprah Winfrey Show. In 2009 Interior Design Magazine honored him with their Lifetime Achievement Award. In 2010, his firm Brooks + Scarpa was awarded the National and State of California Architecture Firm Award from the American Institute of Architects. 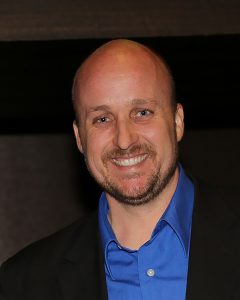 He has received more than $1.5 million in federal, state and local grants for his interdisciplinary research and design work and just received his second Florida Sea Grant for development of adaptation planning. Grants have included the National Endowment of the Arts (NEA), National Oceanic & Atmospheric Administration (NOAA), Kellogg Foundation and United States Environmental Protection Agency, to name a few. Huber was previously the Assistant Director of the University of Arkansas Community Design Center, an internationally recognized outreach center of the Fay Jones School of Architecture. Huber is a South Florida native having previously worked and consulted with various firms. He has previously worked for Zyscovich Architects in Miami having been a project manager on several high-profile projects. Huber received his Bachelor of Design in Architecture and Master of Architecture from University of Florida (Gainesville) in 2004, and a Master of Landscape Architecture + Environmental and Urban Design from Florida International University (Miami) in 2019.